Turn a box brownie mix into these creamy, dreamy Cheesecake Brownies! They're rich, fudgy and have a swirl of cream cheese filling!

Hello, chocolate lovers! I see you eyeing those brownies....that fudgy bottom layer and creamy swirl. Notice how I stacked a few up for ya? Yeah, that's because one just might not be enough!

If I could send one of these Cheesecake Brownies through the computer screen to ya, I sure would. But since I can't, I'll share the recipe (and some helpful tips!) with you instead. You'll thank me later! 🙂

How do you make Cheesecake Brownies?

This recipe calls for a boxed brownie mix, so it's super quick and easy. Simply mix the brownie batter according to the box instructions and pour into a 9x9" pan.

Stir the softened cream cheese and sugar in a mixing bowl until smooth. Then whisk in the egg and stir in the ½ cup of chocolate chips. Spoon the filling over the brownie batter, leaving some space where brownie batter peeks through.

Next, you're going to take a butter knife and swirl the cheesecake and brownie batter. Once you have the look you want, you'll sprinkle the remaining 2 tablespoon chocolate chips on top.

Bake until it's a light golden brown and the edges are set. Let cool, then cut and enjoy!

If you're not worried about the appearance and cleanliness of your brownie lines, then simply cutting them with a knife in the pan will do the trick. However, I find clean-cut squares so satisfying!

Here's what I do. First, let the brownies cool completely and refrigerate. Then, remove the entire sheet of brownies out of the pan and onto a cutting board. Use a chef's knife (any knife will work, but I find a chef's knife to work best) to cut the squares.

Do Cheesecake Brownies need to be refrigerated?

Due to the dairy (and moisture) in the cheesecake swirl, these do need to be refrigerated*. I like to cut them and place them in a container with a tight-fitting lid.

If you stack them, I'd recommend putting a sheet of waxed paper in between the layers so they don't stick together.

*If you're bringing these to a potluck or some sort of event, you can keep them at room temperature for several hours. However, I don't recommend keeping them out for more than 8 hours.

No brownie mix? No problem!

If you don't have any brownie mix, here's what I recommend. Use my Chewy Homemade Brownie recipe and put it in a 9x13 pan instead of a 9x9. This will take a little longer to prep, but will also cut down on the bake time!

Follow us on Pinterest, Instagram and Facebook so you never miss a recipe!! And as always, thank you for following along with my blog, making my recipes, liking and sharing on social media and any other way you support Dance Around the Kitchen!  -Kelsey 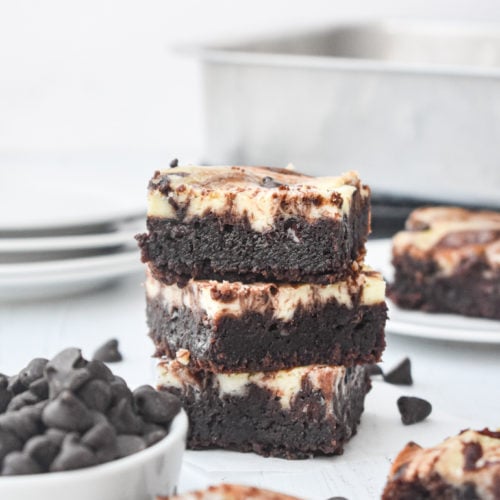 *A 9x13" pan will work too.  However, the baking time will be significantly shorter and the brownies will be more thin.
Tried this recipe?Follow me at @dancearoundthekitchen.kelsey and let me know how you liked it!